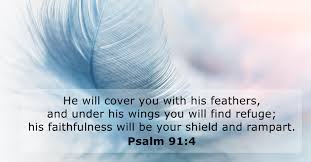 His massive arms are wrapped around you, protecting you. You can run under His covering of majesty and hide. His arms of faithfulness are a shield keeping you from harm. You will never worry about an attack of demonic forces at night nor have to fear a spirit of darkness coming against you.  Don’t fear a thing! Whether by night or by day, demonic powers of evil launched against you.  Even in a time of disaster, with thousands and thousands being killed, you will remain unscathed and unharmed.  You will be a spectator as the wicked perish in judgment, for the will be paid back for what they have done! Psalm 91:4-8 TPT

This past Sunday, our pastor addressed the wide-spread fear and panic concerning this new strain of virus. He mentioned that Psalm 91 is our God given covenant promise that we are covered, connected and kept. It’s been on my mind all week and for good reason. Twice now, God has opened a door for me to share this with new believers.

You know, I understand fear in unbelievers. I even understand fear in new believers because they haven’t been taught yet. But when I see seasoned saints talking fearfully about the virus, that’s very concerning to me. It makes me wonder exactly how much time they spend thinking about what the news media is saying verses the Word of God.

As believers, we hold the answers for the world. The truth is in us because Jesus is in us and He called Himself the Way, the Truth and the Light. Jesus points the way to the Father and no one can come to Him any other way. Instead of joining in on their fear, let’s point them in the direction of Psalm 91 and tell them to read it every day out loud to themselves.

Both of these ladies began by asking me, “Aren’t you afraid? So many are getting sick!” One even read a report from her phone that there are 8 confirmed cases in Florida. My response was the same for both of them; Psalm 91 says that when I place my confidence in God, I have nothing to fear. Read it for yourself. They both grabbed a pen and wrote it down.

Remember that the next time you’re tempted to fear or overhear others talking fearfully. You have the ability to walk in love and cast out fear. Psalm 91 each day keeps the doctor away!

2 thoughts on “An Ounce of Prevention…”