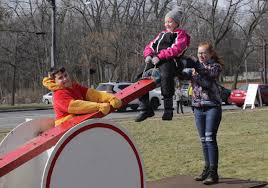 I just can’t seem to get this verse out of my head. I have been thinking on it for a few weeks now and the other day I heard the Lord say, “Counterbalance”, so I looked up the definition and found this; to have an effect that is opposite but equal to (something) : to balance (something) by being opposite.

As I thought of how this applies to God, I realized that He is indeed our counterbalance. He’s light in our darkness, strength in our weakness, able when we’re unable, health to our sickness and provision for our lack. What a great God!

Let me go a step further with this. He gave us His Holy Spirit so anything we don’t know, He leads us to the truth of it. Anything we can’t do, He’s our helper. When we pray in the Spirit, it builds us up in the weak areas of our life. I like that!

God was David’s counterbalance. He took a little shepherd boy and used him to take down a giant with a stone.  Jesus used a young lad with a 3 piece fish dinner to feed a multitude when He became his counterbalance. God became Mary’s counterbalance when He planted His seed in her womb to carry His son.

I don’t know what you’re facing today, but stop thinking you can do it or change it on your own. God wants to be your counterbalance, but He’s waiting on you to let Him be what you need Him to be.  He’s all sufficient! You can’t, but He can!

Father, I don’t have a clue how this is going to work out, but as Your word says; So we are convinced that every detail of our lives is continually woven together to fit into God’s perfect plan of bringing good into our lives, for we are his lovers who have been called to fulfill his designed purpose. Counterbalance me, Lord. I feel like I’m on a teeter totter with someone on the other side that’s much heavier and I can’t get down. But just as I know You will, place Your hand on me and rescue me. I’m so thankful. It’s in Jesus’ name, Amen.